Celery Juice is all the rage right now and the “healing” claims sound almost too good to be true, but are they?

Well, I’ve been drinking celery juice for a month now, and I’m here to give you a quick and honest review.

Firstly, I heard about celery juice from my sister. She heard about it from another friend who recommended a book written by Anthony Williams, the Medical Medium, to her.

Full disclosure, I haven’t read the book, but I have listened to his podcast and researched his claims and, I gotta say, I don’t hate it.

Now, if you haven’t heard already, one thing the medical medium claims is to have a “spirit” who is with him at all times telling him what we should and should not eat and what foods will heal people.

Let me say that when it comes to this aspect, I’m not completely buying it, but I’m not saying I don’t believe him either. I’m a big believer in divine help or help from “angels.” I think Angels will and do help us in times of need, comfort and for other reasons.

That being said, am I buying Anthony’s claims about the “spirit” that helps him. I don’t really know. I won’t discount it but I won’t say that I’m jumping all in either.


Setting that aside, I’ve been trying celery juice for a few months now and I’d like to give you an honest review.

Now, the claim is that Celery juice has undiscovered cluster salts that bind to the toxins in our liver and flush them out. It’s said to be a “miracle juice” for healing from chronic illness.

To achieve the most benefits, we are supposed to drink it pure (not mixed with anything else) and first thing in the morning on an empty stomach. It also helps your body build up bile, therefore aiding in better digestion.

It’s also been said that is helps restore the central nervous system and removes old toxins from the liver, such as heavy toxic metals, chemicals and pesticides. They also say it helps build up your hydrochloric acid, which helps break down protein. If protein isn’t digested, it leads to bloating and gut problems. Ew!

Now, I don’t know how much of this is true, but I can tell you my experience.

First, Anthony says that you should drink 16 ounces of Celery juice a day to reap the full benefit, but this was hard for me.

It’s not that celery juice tastes bad and it’s actually surprisingly bland, just like the vegetable itself. But, and this might be major TMI, but for the first week after drinking the full 16 ounces of celery juice every morning, I had crazy digestive problems. To be totally blunt, for at least a few hours after drinking it, it was Mamma Mia, Montezuma’s revenge, crazy immediate diarrhea. There, I said it. I also noticed that things were coming through, um, not totally digested? Gross, I know. This is supposed to be a good thing also, as it’s said that food get’s trapped in our gut and ferments. Um, double gross.


This is supposed to be a sign that you’re full of toxins and the celery is doing it’s job, but for me, it was maybe doing it’s job a little too well.

Side note: I had surgery not long ago and the medicines they use during surgery can cause very opposite digestive issues. Well, this was the case for me for a few days and, as I started to become uncomfortable, I just made myself a glass of Celery juice. An hour later, problem solved. So, if you are having sluggish intestine issues or regularly get constipated, I suggest trying some. It might just do you wonders. Lol.

Anyway, if you find that Celery juice is making things move much too quickly, try drinking less at first. Ease into it, as they say.

Now, It took me a few weeks to see results, but I have been seeing them. During the winter, I have this dry very painful rash on my hands. That rash is now almost completely gone. I’ve also noticed that my skin is glowing and I’ve had fewer long term digestive issues, something I’m prone to.

I’ve also noticed that I don’t get cravings nearly as often. Like, if I’m craving something sweet or salty and I drink the celery juice, the craving goes away. Major score for anything that curbs cravings! If you’re trying to quit sugar, this could be a great tool for you! And if you’re someone who loves sour cream and onion chips, good heavens they are good, try this before you dive into a bag. 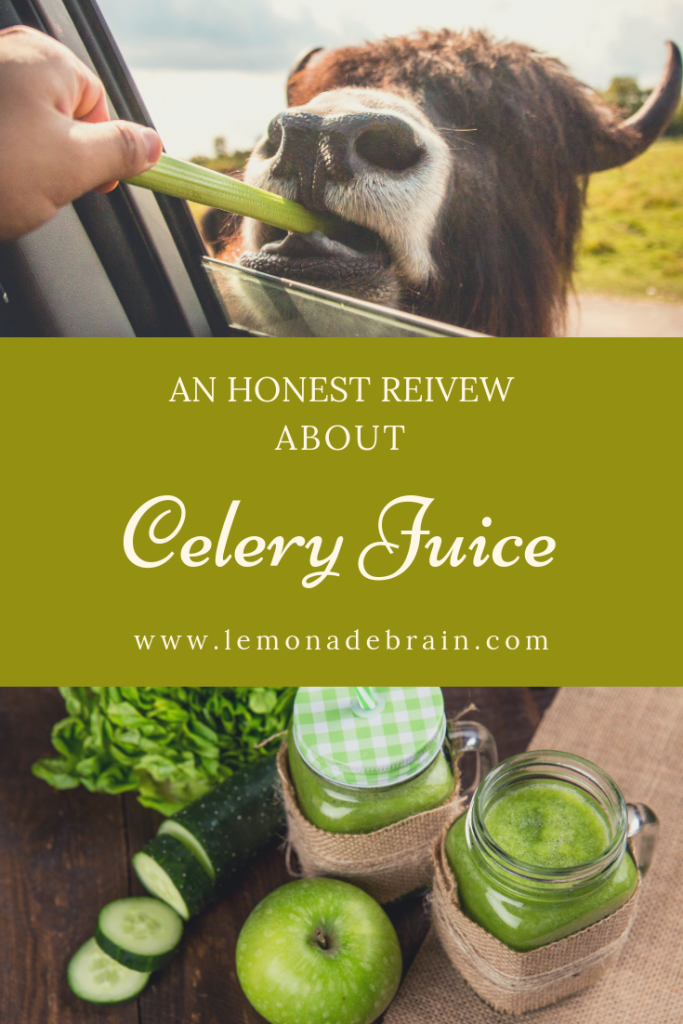 Now, the down sides (beside the first week of diarrhea.) It can get really expensive. It takes almost an entire bunch of celery juice to get 16 ounces. This adds up to at least a few dollars a day, depending on where you buy your celery. It’s also not super easy to juice and, even if you have a juicer like I do, takes time.

You also should not make it ahead of time, as the juice starts breaking down almost immediately. I’ve tried this and it get’s nasty (and brown) fast.

For this reason, I’ve been doing celery juice about 3-4 times a week. It ain’t what’s recommended, but I figure that, as long as I’m seeing benefits, it’s better than nothing.

Anyway, overall I think it’s been a good thing to add to my lifestyle. Now, do I think it’s a cure all? Nope, I do not, because it takes more than just juice to create a healthy body. But I do think it has benefits, and the benefits are enough for me to keep on trying it.

Again, start slow because it can cause diarrhea, like it did with me. You can even start with 2 ounces and work your way up.

If you can afford to get a juicer, do it. Here are a few I like that aren’t going to break the bank.

And if you think you could be suffering from a toxic liver, here’s Anthony’s book. Who knows, maybe it has some answers to your healthy problems.

Like I said, I don’t believe any one thing is a “miracle drug” when it comes to health. Health is about making lots of small better choices and slowly improving. Don’t be too hard on yourself when it comes to change. Change takes time and any step in the right direction should be freaking celebrated!

I hope you find this review helpful and I hope you’re life get’s better all the time!